The understanding of the interplay of movement, behaviour and physiology that biologging offers has applied relevance for a range of fields, including evolutionary ecology, wildlife conservation and behavioural ecology. In recognition of this, the Journal of Animal Ecology has an upcoming Special Feature on Biologging  (submissions due 20th September).

But sometimes, you don’t end up tracking exactly what you expect… This was the case for Dylan Smith, an undergrad at Kansas State University doing research on grassland songbirds. However, not to be discouraged by this surprising result, Dylan is currently looking for a Master’s program.

I was looking for a baby bird, a Dickcissel that recently left the nest (fledged). So why am I holding a snake? Because that little lump in the snake’s belly is the bird that I was looking for. Thanks to the radio transmitter I attached to the bird, I can still locate it, even from the inside of a snake’s belly. I can follow the snake long enough to retrieve the transmitter after the snake is – ahem – “finished” with it. Now that I have retrieved it, I can clean it off very, very thoroughly and reuse it on another bird later. 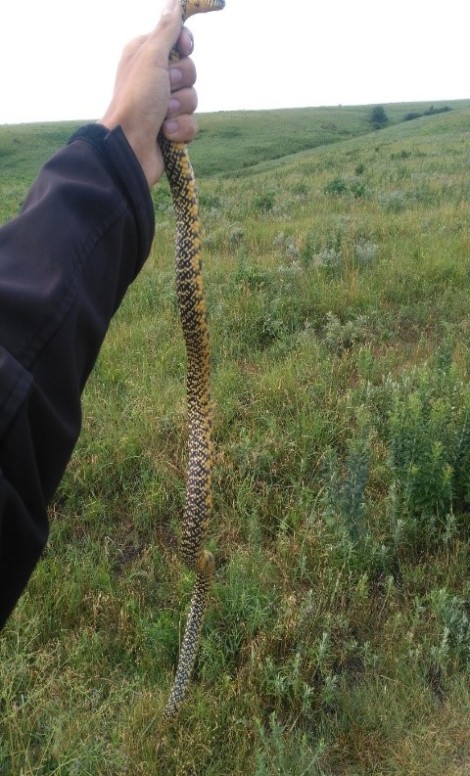 There’s a bird in this snake!

Even though I set out to look for young Dickcissels, I ended up spending a lot of time trying to find predators. Here’s another example: I tracked a fledgeling to a hole in the ground. I’d found a few birds that were underground before (which I can tell by the way the dirt messes with the signal, plus the fact that the strongest signal points to bare ground), but I never before found an actual hole. Because of this, I didn’t actually know what was taking these birds underground (Snake? Small mammal? Badger??). I decided to take advantage of this by placing one of the nest cameras we were using for another project at the entrance, to try and see what came out. Unfortunately, I never managed to find out, since the predator must have been scared off by the camera and used a different entrance.

I didn’t set out to track predators. For an REU (Research Experience for Undergraduates) project in Dr. Alice Boyle’s lab, I was trying to track Dickcissel fledgelings, to determine how they moved after leaving the nest, and to study their survival. Another researcher, Sarah Winnicki, was studying baby birds while they were in the nest, to see how Brown-headed Cowbird brood parasitism affected the hosts’ growth. Brood parasitism is a reproductive strategy in which, rather than making their own nest and caring for their own young, female cowbirds lay their eggs in the nests of other species (including Dickcissels) and force the host species to care for their young. Although this would seem like cowbirds are placing a burden on the hosts, and cowbirds have strong impacts on nest success in other systems, there isn’t much evidence that parasitism affects the chances of a nest fledging at least one young in our system. But does cowbird parasitism affect the birds after they leave the nest?

One of my fledgelings perched in a plant. I didn’t even know they did that this young!

The plan was to obtain ten radio transmitters, which emit a beep ever couple seconds that can be heard using a receiver and antenna and attach these to Dickcissel nestlings before they leave the nest. I would attach half of the transmitters to birds from nests with cowbird parasitism, and half from nests without parasitism, to compare between the two. Then I could relocate them daily to see where they move and how long they survive. I would go back to each spot the next day and measure the habitat the bird was choosing. After two weeks, I would recapture the bird and remove the transmitter, both to save the bird from the hassle of carrying it around, and to allow me to reuse it a second time. This would allow me to track a total of twenty birds, ten with and ten without parasitism.

The challenging part of this study wasn’t really the actual tracking of the birds – that part is easy. Just wave an antenna around and find the spot where the beeping is loudest. The hard part is finding the birds in the first place. I needed to locate Dickcissel nests, and then I needed the babies in those nests to make it to fledging. Dickcissel nest success is naturally pretty low, so this is a bigger roadblock than it might seem. Few nests make it to hatching, and out of those that do, few of those make it to fledge age. And even if they do manage to fledge, the first four days out of the nest are the riskiest of all. Previous studies found that 70-90% of Dickcissel fledgelings don’t make it past four days. As for my study, a full half of my birds were eaten within a day of leaving the nest.

Here I am tracking one of my fledgelings with an antenna. I always liked how cool this part looks.

If a bird made it the full planned tracking period of two weeks, then I needed to try to recapture the bird to remove the transmitter (since it was sized to fit on a recent fledgeling, not an adult). This proved much more difficult than I’d imagined it would be. The usual method to catch a specific bird involves setting up a net in its territory and playing a territorial song, to make the bird think there was an intruder. The bird would then fly over to investigate – right into the net. However, fledgelings don’t defend territories of their own, so this technique wouldn’t work. The only strategy we had was to track the bird to a patch of shrubs, set up several nets around the shrubs, then wade through bushes higher than my head to try and scare the bird into a net. We tried for several hours several days in a row, with no luck. We did capture it eventually, and I’ve never felt so accomplished in my life. I measured as many things as I could think to measure, and I let it go, feeling a little bit of pride that “my” bird had made it.

“I measured as many things as I could think to measure, and I let it go, feeling a little bit of pride that ‘my’ bird had made it.”

Unfortunately, this was the only bird that made it. Out of the twenty birds I was planning on tracking, I only ended up with six. This was largely due to a severe drought on Konza this summer, which reduced the number of nesting attempts later on in the season (the time of season when Dickcissels normally do most of their nesting). I did see several juvenile Dickcissels being fed by parents, which means there were definitely many nests that we simply weren’t able to find in time. If I were to conduct a similar study again in the future, I would make a stronger effort to find nests early in the season, rather than expecting to find plenty later on. 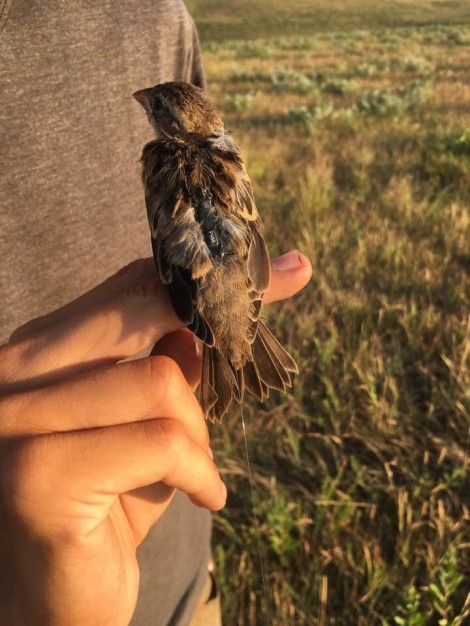 This was the only fledgeling that made it to two weeks after leaving the nest.