Following our #DiversityInEcology theme, Conor Ryan discusses his experiences of judging whether to be ‘out’ to colleagues and crew members during boat-based fieldwork. A congenital ecologist, Conor’s career began in the late 1980s, where he developed a keen interest in intertidal ecology, undertaking almost daily field trips to the seashore across from his home in Cobh, Ireland. Though he logged significant hours searching beneath barnacle-studded rocks for eels, his publication record on this seminal research was sorely lacking because he was five years old. As he grew, so too did the size of the marine creatures that he was preoccupied with. He completed his PhD in Galway on the ecology and population structure of baleen whales in the Celtic Sea, using stable isotope analysis, molecular genetics and organochlorine contaminants. During this time, he realised that the lab was not his natural habitat, so he now works as a research scientist primarily in the field, using passive acoustics and line transect surveys to study cetaceans. His whereabouts mirror that of an Arctic tern, although he has a much more placid temperament. He works as a guide, lecturer and RIB driver in Antarctica and the Arctic during their respective summers. As a result, though he calls the Isle of Mull in the Hebrides “home”, he is scarcely found there.

As an ecologist, how do I reconcile my sexual orientation with my professional persona? Should I even have to do that? Afterall, my sexuality has no bearing on say, my ability to map the distribution of an animal or to solder a hydrophone. But, we work to the best of our abilities and reach our full potential when we are afforded the opportunity to be ourselves. In that sense, I argue, honesty and openness about being gay is relevant to my work because it is an important part of who I am.

“… of those scientists who identify as LGBTQ+ working in the life sciences, just 57% are ‘out’ to most of their colleagues…”

I don’t believe that my employability is affected by me being openly gay, and thankfully I have never heard of this level of discrimination in our profession. However, if I said that being gay poses no barrier whatsoever to my work then I would be lying. While doing some research for this blog on #DiversityinEcology, I learned that of those scientists who identify as LGBTQ+ working in the life sciences, just 57% are ‘out’ to most of their colleagues [1][2]. My hunch is that the situation may be worse for fieldworkers in ecology. That said, I feel like the situation is improving: searching queerSTEM in Twitter will demonstrate my point.

The challenges of being gay are most apparent to me when I work in countries, or with colleagues from places, where homosexuality is less culturally acceptable. Or worse still, where it is criminalised. To pick an extreme example, I can think of at least one country in which I wish to conduct fieldwork but will not do so because homosexuality is punishable by death. But the geography of my work isn’t the only concern.

“Consequently, judging whether to be ‘out’ is a mentally draining dilemma”

I usually spend about six months a year at sea, either wrangling hydrophones or working as a driver and educator on polar expedition ships. I love being at sea but it means being isolated. Consequently, judging whether to be ‘out’ is a mentally draining dilemma. If I misjudge a situation, and my openly identifying as a gay man troubles someone else on board, it will negatively affect our personal and working relationship, because at sea, they are one and the same. In an ideal world, their discomfort with my sexual orientation would be their problem, not mine. But, when living and working in a confined space for weeks, often sharing cramped sleeping quarters, mealtimes and workspaces, their possible prejudice is very much my problem. Because social and working spheres are inseparable on ships, the potential for fallout is ever present with no escape.

That said, I thankfully have never had a bad experience in this regard on ships, but, in truth, I have not always felt comfortable being forthcoming at work about identifying as a gay man. And regardless of sexuality, I can be somewhat private about my personal life. Being shy and being afraid are two very different things, and no working environment should pressure someone into disclosure about any aspect of their private life. Equally, our working environment should feel safe enough for us to be fully transparent should we chose to do so. At certain times, the professional risks of being out, including the importance of the group dynamic, have felt too great. In risk-assessment parlance (he appeals to universal love of risk-assessments to pique the reader’s interest) it is a low-likelihood, high-severity scenario. 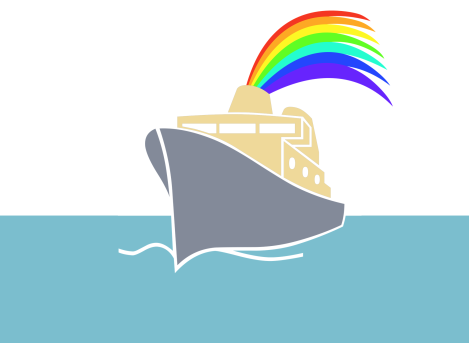 Should I tell my colleague I am gay? I try to see things from their perspective. Imagine for a moment, that I am this hypothetical colleague and come from a place where homosexuality is culturally unacceptable or even illegal. But I find this to be offensive and unjust. Perhaps I myself am gay (and, perhaps, closeted). Regardless, if I were to learn that a close colleague on board the ship went out of his way to conceal his sexual orientation from me, I would be deeply insulted. He assumed that I am homophobic, because of my nationality?

You see the conundrum. When working on ships or in remote field sites, deciding to be out or not can result in an incessant internal dialogue. Meantime, the other challenges of fieldwork are laid on with a trowel: do we have our necessary research permits? Is the vessel ready to set to sea? Is the weather going to allow us to achieve our goals? Is the equipment calibrated and working?

“When getting to know a colleague, we can pose certain questions in a gender-neutral manner … The difference will be noticed”

Given that I spend up to six months a year doing fieldwork, being out is important to me. Otherwise, I risk spending half of my days concealing an important part of who I am. That’s probably not a healthy way to be. Besides, I feel I let down the LGBTQ+ community if I dismiss the “your wife must miss you when you are at sea” type of enquiries. (People actually say this).

So, what can we do to address the sources of anxiety experienced by some LGBTQ+ ecologists and non-ecologists alike? Even small gestures have a great positive impact. Affirm the presence of allies and offer support. A simple inclusive diversity statement is invaluable: “on this ship/project dignity and diversity is valued and defended”. When getting to know a colleague, we can pose certain questions in a gender-neutral manner. “Do you have partner?”  instead of “Do you have a wife/husband?”. The difference will be noticed, as members of the LGBTQ+ community are acutely attuned to the vocabulary of inclusion.

“What would I say to young or newly fledged LGBTQ+ ecologists is, to find your people and your allies: there are lots of us!”

I hope I have not painted a grim picture, because overall, I am very happy about being a gay ecologist. Looking to both the past and to the future, I never doubt that I should have chosen a different career path. What would I say to young or newly fledged LGBTQ+ ecologists is, to find your people and your allies: there are lots of us! I have found great comfort in talking to other LGBTQ+ ecologists about their experiences. One of the best aspects of field ecology is the enduring and wonderful friendships that I make while working. These friendships are somehow galvanised by long periods of often challenging conditions that fieldwork presents. The colleagues worth working with and the friends worth having, undoubtedly wish to know the full me.

One response to “Should I tell my colleagues I am gay?”