I can see elephants in my backyard—at least fifteen of them, youngsters and grownups. They are a few hundred meters off, but distinctive amongst the thorn trees, and my eyes drift to them every time I look up from the computer screen.

Elephants as seen through the window as I sat down to write this post at Mpala Research Centre in Kenya, July 5th 2015

In the 12 years that I’ve been working here at the Mpala Research Centre in central Kenya’s Laikipia Highlands, elephants have grown both more abundant and more tranquil, less prone to howl at passing cars. This shift has both deep and shallow historical roots: Laikipia’s colonial legacy of large landholdings, a decentralized local conservation movement, the diminishing profitability of livestock, the rise of ecotourism, urbanization, globalization. These factors, independently and synergistically, have helped Laikipians tolerate elephants, and tolerance is reciprocated. Sitting at this little desk in this tiny sliver of equatorial Africa, I find it easy not to stew about the future of elephants. I mean, look at them out there.

In Mozambique’s Gorongosa National Park, where I spent the previous month, things are different. Gorongosa’s elephants are rebounding after having nearly been exterminated during two decades of war (another colonial legacy). The story of exactly what happened to the elephants during those years remains to be told, but the anecdotes are depressingly credible: ivory swapped for guns used to shoot more elephants to buy more guns. Since 2004, a sweeping restoration effort has bought the time and space for elephant numbers to quintuple, but erasing the biological and cultural legacies of the slaughter will take centuries. Gorongosa’s elephants, many of them tuskless, are anxious on the best of days; on the worst of days, they try to kill you. 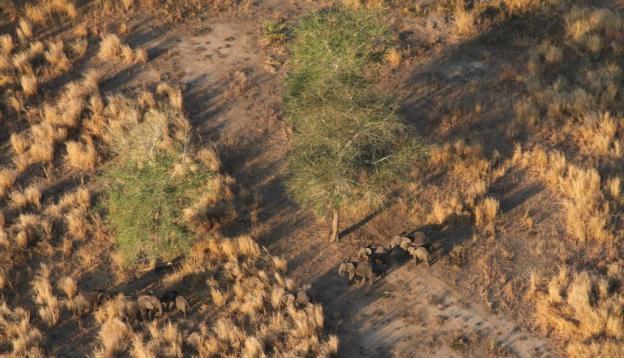 A herd of elephants, including tuskless females, in Mozambique’s Gorongosa National Park

Just as you can read human history in elephant behavior, you can read elephant history in the landscape. Anyone who has ever seen an elephant feeding can appreciate their ability to maintain open savannas (or, more pejoratively, to destroy woodland) by felling large trees. Accordingly, the human-elephant détente in Laikipia has left footprints. When my colleague Truman Young started working at Mpala in the early 1990s, the tree Acacia hockii was locally common. Now, it is almost gone; a team of botanists recently found one individual growing in an inaccessible rock-slope refuge—a great find. Because each tree species is the hub of many ecological interactions, elephants’ feeding habits can create shockwaves throughout entire communities. The hook-thorned Acacia mellifera, whose cage-like architecture provides daytime sleep-sites for nocturnal bushbabies, seems to be declining on Mpala’s clay-rich soils as elephant densities increase. As goes mellifera, so should go bushbabies.

In Gorongosa, conversely, the prolonged absence of elephants and other large herbivores has triggered substantial expansion of woody vegetation. Work by my student Josh Daskin has shown that tree cover has more than doubled in Gorongosa’s Rift Valley habitats over the past 35 years. This too has undoubtedly had cascading impacts on Gorongosa’s other fauna.

This ability of elephants to transform landscapes has motivated a large body of research, including our study in Journal of Animal Ecology. We showed that fire—another potent form of disturbance in savannas—amplifies elephant ecosystem engineering in Mpala’s clay-soil habitats. The vast majority of trees in these soils are whistling-thorns (Acacia drepanolobium), which elephants rarely touch. Why? Because A. drepanolobium is well-defended via its co-evolved relationship with ants that protect the trees from herbivores (elephants dislike getting ants up their noses). The experiment involved torching a series 900-m2 patches, inside and outside of plots from which elephants and giraffes are excluded using two-meter-high electrified wires.

These controlled burns killed many of the ant colonies, depriving trees of their symbiotic guardians. In the elephant-free zones, the antless trees stayed upright. But outside the fenced areas, elephants zeroed in on the newly vulnerable trees and wreaked havoc.

Of course, ‘havoc’ depends on your point of view. For arboreal dwarf day geckos (Lygodactylus keniensis), which are the most numerous vertebrate animals in this habitat, the patches of toppled trees were prime real estate. Browsing elephants snap stems and large branches, creating small cracks and crevices that geckos use as refuges and nest sites. In our experiment, gecko abundance quickly doubled in plots affected by both elephants and fire—a synergistic effect, meaning that the combined impact of the two disturbances together was greater than the sum of each independently.

But the gecko housing bubble was short-lived. After 12 months, severely damaged trees in the unfenced plots began to collapse, reducing gecko densities from the astronomical levels (up to 1,100 per hectare!) attained in the first year of the experiment. In the fenced burned plots, meanwhile, scorched trees were slowly decaying, creating novel lizard-friendly fissures. After 16 months, gecko abundance was equally high in all burned plots, regardless of elephants. Thus, fire by itself had the effect of doubling gecko abundance; it’s just that the effect emerged more rapidly with an assist from the elephants. In contrast, elephant effects materialized only in burned plots and then melted away.

The importance of fire-elephant interactions in African savannas is widely appreciated, but our study was unusual in two respects. First, due to the difficult-to-tame nature of both elephants and fire, most prior studies have relied heavily on observational data. By manipulating both fire and elephants in a controlled and replicated experiment, we were able to quantify their interactive effects in the absence of confounding environmental variability. Second, although small animals constitute the bulk of biodiversity, prior studies of the elephant-fire nexus have focused almost exclusively on vegetation. Intuition suggests that these ‘destructive’ forces should negatively affect arboreal animals (and in some cases they surely do), yet our study showed that their effects can be positive—and even more positive in combination, at least temporarily—by rearranging tree architecture.

As illustrated by the divergent scenarios unfolding in Laikipia and Gorongosa, elephant populations are acutely sensitive to the human dramas in which they are embedded. Their profound ecological impacts, like those of fire, stir strong emotions and spark debates that divide management teams. What is the right number of elephants, and how often should a savanna burn? Science cannot adjudicate those subjective questions, but it can help us anticipate the likely consequences of their answers. Observational, experimental, and modeling studies each independently illuminate important facets of this problem; together, their effects are synergistic.

For more of Rob’s photos please see the slideshow 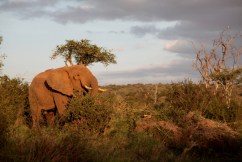 An elephant browses in riparian bushland at sunset, Laikipia, Kenya

Elephants consume a mixture of grasses and woody vegetation

Foliage flies as an elephant feeds on forbs in central Kenya

An elephant feeds on Balanites at Mpala Research Centre 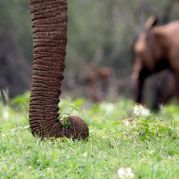 Elephant grazing in the wet season

An elephant prepares to chow down on Acacia drepanolobium 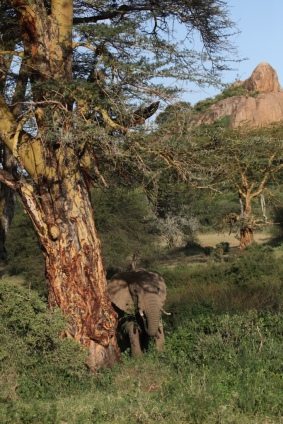 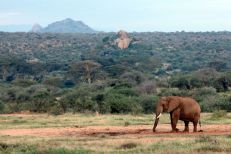 All photographs by Robert M. Pringle