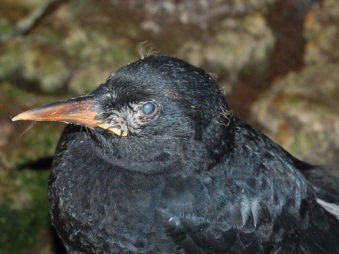 This blog post is a press release from the authors of Journal of Animal Ecology paper “Evidence of the phenotypic expression of a lethal recessive allele under inbreeding in a wild population of conservation concern” by Amanda E. Trask et al. Press release issued by University of Aberdeen

The last remaining Scottish populations of the rare red-billed chough are being affected by a genetic mutation causing lethal blindness, a new study from the University of Aberdeen and the Scottish Chough Study Group and funded by NERC and Scottish Natural Heritage has shown.

Blindness was first observed in a chough chick in 1998 and small numbers of blind chicks have occurred in most years subsequently.

Blind chicks can survive in the nest while being fed by their parents, but once they leave the nest they die very quickly.

Furthermore, the research shows that non-blind individuals that carry the mutant gene are likely to be widely-distributed within the Scottish chough population and therefore eradicating the mutation is likely to be difficult.

Amanda Trask, a PHD student at the University of Aberdeen who undertook the study said: “Our research shows that the blindness mutation is likely to persist in the population into the future despite being lethal in blind individuals. This is because non-blind individuals that carry the mutant gene produce large numbers of chicks per year, causing the mutation to be passed into the next generation.

“Choughs are now very rare in the UK and there are just two populations remaining in Scotland, on the Islands of Islay and Colonsay. The Scottish Chough Study Group has been studying these populations since 1981 to determine the causes of the population decline and work out strategies to reverse it.

“Despite being lethal, blindness actually only affects a few chough chicks each year and should probably not be the priority concern for Scottish chough conservation, compared to managing habitat for choughs. However, the blindness may be a symptom of the poor ‘genetic health’ of the population. Conservation strategies to manage these genetic concerns will need to be considered in the future. ”