Turtles (and tortoises) are among the most outstanding and recognizable groups of animals on the planet. Despite being a relatively species poor clade (only 327 extant species), they are easily recognizable and adored by many (you’d be hard pressed to find any other reptile so heavily featured in children’s toys sections). Ever since the Triassic period, roughly 220 million years ago, they have been a constant and familiar aspect of the earth’s vertebrate fauna, found on all continents barring frigid Antarctica, and easily distinguishable by their unique trait – the bony shell, a derivative of the rib cage that encompasses their entire body and provides them with uncanny protection. At present, however, they are also among the most endangered taxa on Earth, with more than half of extant species threatened with extinction [1].

Turtles are not only unique in appearance, but also remarkably different in many other ways from other tetrapods, even from other reptiles. They have captivated the minds of researchers for decades, in fields as varied as paleontology, evolution, movement ecology, functional morphology, behaviour, biogeography, and many more. This extensive body of work has produced some very interesting results. In fact, turtles seem indifferent to many supposedly universal “rules” in ecology [2][3][4]. One of the most ubiquitous patters in ecology and biogeography is the tendency of diversity to peak at low latitudes – yet the richness of turtles actually peaks at 25° north! Similarly, while many animals (particularly endotherms) display clear latitudinal patterns in body size, turtles seem to show no clear pattern to speak of. Also in the realm of body size, turtles seem to break the so-called “Island Rule”, which posits that large animals evolve smaller body sizes on islands, whereas small animals evolve larger body sizes – insular turtles are just plain bigger (some, like the famous Galápagos tortoises, are veritable giants). The pattern in distribution range sizes of turtles is also, for lack a better word, weird. Turtle range sizes display peaks at high latitudes, but also decreases in mid-latitudes. Finally, at least for now, is the issue of home range size and its relationship with body size. Home range size is expected to increase with body size with a similar slope to the relationship between body size and metabolic rate, so that the size of the home range is a reflection of the animal’s metabolic requirements. And yet, the slope in turtles is shallower than expected, and the correlation with body size isn’t particularly strong.

Why are turtles so weird? The short and unfortunate answer is, we don’t exactly know. The mechanism underlying the patterns in turtle species richness, body size, and range size remain to be uncovered. The bright side, however, is that there is still a lot to study and learn when it comes to this fascinating and captivating group of animals. The complete tome on turtles remains far from written. However, they are at risk, and many species face extinction. Turtles have been subjected to harvesting by humans for centuries, both as a source of food and for use of their shells, and nowadays many species suffer from habitat loss and poaching for illegal wildlife trade. Many large and iconic species have already gone extinct due to human influence [5]. With so much still left to learn about turtles, and their great cultural importance in human societies worldwide, their loss would be a monumental tragedy both for scientists and for humanity as a whole. 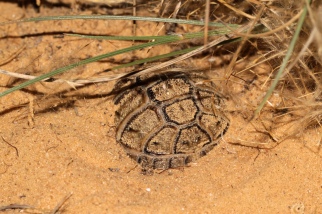 Testudo graeca in the fields of Be’eri, Israel. Photo by Alex Slavenko.

Tetsudo marginata and Testudo graeca peacefully co-existing in the heart of Athens, within eyesight of the Akropolis. Photo by: Alex Slavenko.

One response to “The curious case of turtles and ecological “rules””