Our own Blog Editor Sarah Marley was fortunate enough to attend the International Mammal Congress earlier this month.  Here, she gives us the conference low-down from the land down-under!

Earlier this month, the International Mammal Congress (IMC) was held in my adopted city of Perth, Western Australia.  Held every four years, IMC is considered the premier international mammal conference, providing an important forum for professional mammalogists wishing to remain updated on the latest marine and terrestrial mammal conservation topics, research concepts, and techniques.  This year marked the 12th IMC, with the meeting jointly organised by the International Federation of Mammalogists and the Australian Mammal Society along the theme of “Advances in Mammalogy in a Changing World”. 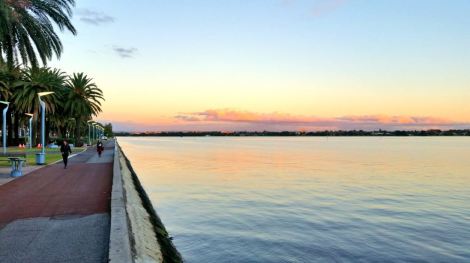 A gorgeous Perth sunset – and yes, this is the austral winter! (Photo: Mike Young)

I had the pleasure of being one of over 750 delegates from 50 countries attended IMC12.  With up to 10 concurrent sessions, 500 oral presentations and 160 posters it was a real science spectacular.  Dr Christine Cooper, member of the IMC12 Organising Committee and Senior Lecturer at Curtin University, was thrilled at the number of world-class scientists attending this year’s event.  “The world’s leading mammalogists spent a week discussing mammalogy in a changing world, with a diverse selection of inter-disciplinary presentations contributing to this theme,” she says.  “The Organising Committee received really positive feedback from delegates and sponsors.  We were delighted with the quality and diversity of all presentations, and the plenary speakers gave outstanding, thought-provoking talks.  We left the meeting with a swag of new ideas, new and strengthened collaborations, and lots of inspiration.” 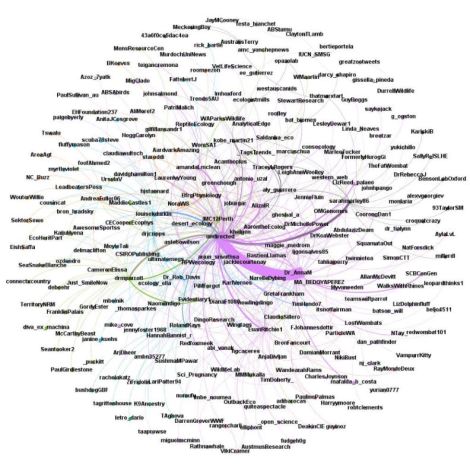 A visual representation of the IMC12 Twitter conversations – and this is just for two days! (Image: Aaron Greenville)

Delegates were also full of praise for the conference.  Dr Chandra Salgado Kent, Deputy Director of the Centre for Marine Science and Technology (CMST) at Curtin University in Australia, presented her findings as part of the Dolphin Watch citizen science project.  She was particularly taken with the diversity displayed at this conference.  “IMC12 was an absolutely critical platform for learning through exchanging our ideas and experiences in research and conservation,” she says.  “I loved the fact that conference attendees ranged widely in their nationalities, personal stories and types of places they work in; from remote to urbanised; areas managed by indigenous communities; from privately owned to government owned; and developing to first nations – this diversity is so important!”

Dr Sue Mason, Research Director of the Dolphin Research Institute, travelled from Melbourne to present her doctoral research on common dolphins.  She was particularly taken with the plenary talks in general – and one in particular.  “While all of the plenary speakers at IMC12 were exceptional, Professor David Macdonald’s presentation on his work with the lions in Africa was a highlight for me,” she says.  “Professor Macdonald spoke eloquently about his study species, his students, and the locals who are working hard to conserve the lions.  His poignant speech struck a chord.  And although many may not want to admit it, there were those of us who shed a small tear during the moving cartoon of Cecil, the lion that was taken by an American dentist trophy hunter, with the cartoon being created by the same animators that produced ‘The Lion King’.”

“Is this thing on?” The small fuzzies also got plenty of attention at IMC12, and even featured as part of the mid-conference tours! (Photo: Roland Kays)

However, the conference did not just focus on the large charismatic species.  Associate Professor Aliza le Roux, from the University of the Free State in South Africa, shared her research on the sensory world of bat-eared foxes.  She enjoyed the variety of topics and species on offer at IMC12.  “In the first place, I thought it was a very unique conference, simply because I’m used to the centre of attention being on African mammals,” she says.  “This was the first time in ages that I can honestly say I learned new things about mammals, every single day, for a whole week.  And not just new techniques, but new ways of being a mammal!  This was very special for me.”

Even some non-fuzzies snuck into the mammal conference (Photo: Ashleigh Wolfe)

Such a large gathering of mammalogists offers plenty of opportunities for cross-disciplinary learning and collaboration.  “As cetacean biologists, we are always trying to follow animals that spend a significant amount of their time underwater,” says Dr Mason.  “Attending IMC12 is an opportunity for us to learn from our terrestrial research counterparts, and further our thinking on species that can be difficult and cryptic to study.”  Dr Salgado agrees, citing the chance to share experiences as an opportunity to also address conservation challenges and draw on expertise from a range of areas.  “Only by sharing our experiences via platforms like the IMC12 can we hope to successfully address conservation challenges in an increasingly global community, and dynamic and changing world,” she says.  “What a fantastic collection of inspiring researchers!  I look forward to continuing to hear from our terrestrial mammalogy colleagues, and applying many of the ideas to challenges we face with the ocean’s marine mammals!”  Such networking opportunities are also important to Associate Professor le Roux.  “I met some fascinating and strange people,” she says.  “Somehow, this was a big conference that had all the advantages of a small conference in that I genuinely engaged with people.  I suspect some weird and wonderful things are going to come from this event.”

For me, one of the benefits of attending conferences is the ability not only to network with scientists at an international scale, but also the opportunity to access local knowledge from the host country.  As a Scot, my undergraduate zoology degree focused primarily on native species and those of neighbouring countries – so marsupials did not get more than a cursory lecture, which mostly focused on their unusual reproduction.  Despite moving to Australia several years ago, my marsupial knowledge is still fairly sparse.  So IMC12 offered a wonderful insight into the unique fauna of Australia, introducing me to their ecology, behaviour, conservation and even a good few dozen species I’d never even heard of before!

To this end, it was a real pleasure to see Indigenous Country Managers presenting results from some of the research they are involved with in regional Australia.  Mr Johani Mamid, a Yawuru Country Manager, co-presented a talk about partnering Indigenous biocultural knowledge and science, which focused on research and management of greater bilbies on the Dampier Peninsula of Western Australia.  He was also co-author on a poster describing the use of camera traps to study the spectacled hare-wallaby in a Yawuru Indigenous Protected Area, a species which had not previously been recorded in the area for nine years.  Mr Mamid enjoyed the experience of attending such a prestigious conference. “The IMC12 was the first international fauna congress that the Yawuru Country Managers have ever attended,” he says.  “We were so happy to participate in the event.  Not only to see what work so many other people from so many other places are doing with mammals, but also to share with them the work we’re doing with mammals in Yawuru country.”  What’s more, he is already looking forward to the next IMC gathering – and encourages other indigenous groups to get involved. “We hope to be at the IMC13 in Alaska to share more of the work and experiences we’re planning on doing with mammals on both land and sea.  We encourage other Australian indigenous ranger groups to also tag along to the next IMC to show how affective their work is for mammals and also to show just how affective and important indigenous knowledge is and can work with the western scientists and their methods, just as the Yawuru Country Managers did at IMC12.”

So, at the end of an amazing week of seeing old colleagues, making new friends, and generally saturating myself with mammalian knowledge, I too am looking forward to IMC13.  I can’t wait to see what everyone achieves over the next few years!