Do you understand beta-diversity? If not, you are likely not alone. Here to explain this under-appreciated concept is Dr Ollie Wearn, an AXA Research Fellow at the Institute of Zoology, London. He is interested in a broad-range of topics, including land-use change, habitat fragmentation, biodiversity monitoring and practically anything involving camera-trapping and-or mammals.

There’s a problem in land-use change research, and we’re not talking about it.

Land-use change is the biggest threat to biodiversity, especially in the tropics. Whilst literally hundreds of studies have examined, often in painstaking detail, how increases in land-use intensity have led to species richness declines, very few have examined what it does to the arrangement of species in space. We call this variation in the species composition of communities across space beta-diversity, and I would argue that it’s one of the most widely misunderstood and underrated ecological concepts. And because of this, it’s rarely considered in conservation management plans.

Why does beta-diversity matter?

Firstly, beta-diversity matters because it tells us how reserves should be designed. All else being equal, high beta-diversity (i.e. higher dissimilarity in the species composition of communities across space) means that a distributed network of reserves will often do a better job at safeguarding the biodiversity in a region, whilst low beta-diversity means that a single large reserve will often be better. With palm oil producers in Southeast Asia and elsewhere making ever-bolder commitments to identify and conserve High Conservation Value (HCV) and High Carbon Stock (HCS) forests, mini-reserves are increasingly being declared within production landscapes. Where these conservation areas are put is still largely determined on an ad-hoc basis, but there is an opportunity (for example through certification schemes such as the RSPO), to promote a more evidence-based approach, and this must include consideration of beta-diversity in these landscapes. We have previously found, for example, that beta-diversity patterns suggest there’s a trade-off in the most effective arrangement of conservation set-aside for conserving large and small mammals in logged forests.

Secondly, beta-diversity matters because, by dissecting its pattern, we can begin to uncover the processes that create and maintain the biodiversity in a landscape. This can have implications for management of these areas. The processes that assemble communities include habitat filtering (species are picky about where they occur), dispersal assembly (not every species can get everywhere) and interactions (species are helped, or more often hindered, by other species). The relative importance of these processes matters for management because it might inform what conservation actions are appropriate. For example, if habitat filtering is strongly determining where species are found, then actions to improve habitat quality might be important, whilst if dispersal limitation is having a strong role in assembly, then restoring landscape connectivity might be more important. 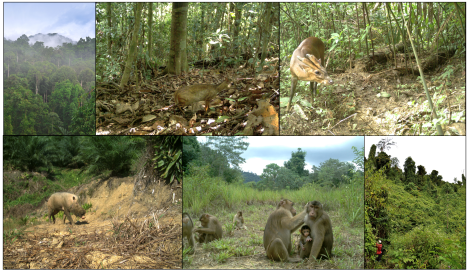 What we did – the challenges of studying beta-diversity!

To study beta-diversity patterns, you need a lot of data. Much of the previous work has been done using data from intensively sampled vegetation plots. Plants don’t move and so it’s relatively easy to find and tag a large number of individuals very quickly. Generating these kinds of data for rare and mobile species communities, like the highly-threated Bornean mammal community, has previously been next-to-impossible.

We set out to generate ‘plant-like’ data for mammals, by intensively sampling species within a large network of ~2 ha plots. These were spread out across the land-use gradient we were interested in: old-growth forest, logged forest and oil palm plantations. Key to the data collection was a large number of digital camera traps left for long periods in the field, each of which was capable of collecting hundreds of animal observations autonomously. All told, the camera trap sampling effort was equivalent to me sitting in the forest for 80 years continuously! It generated more than 15,000 mammal detections. That’s a dataset even a plant ecologist could envy. 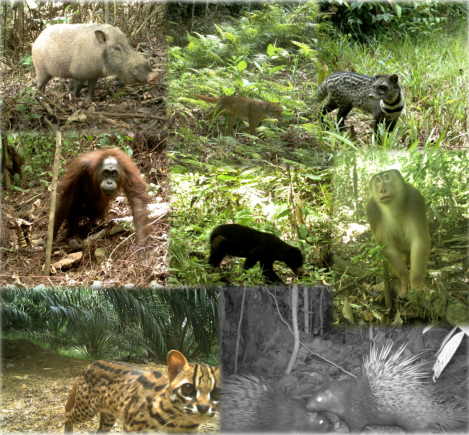 But we didn’t let the cameras do all the work. We also busted a gut lugging steel traps up, down and across our hilly network of plots. Come rain or shine, we set and checked these live traps a total of more than 30 thousand times (you may well question our sanity), capturing and recapturing about 2,000 individuals. In the process, we had the privilege of coming face-to-face with some of Borneo’s rarest and least understood mammals.

Three years, thousands of leech bites and a handful of tropical diseases later, we finally had the data in hand. 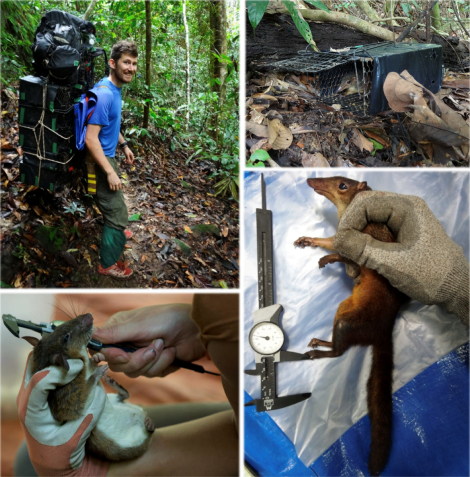 And what did the data reveal?

Overall, our study highlights a poorly-appreciated but important idea: that land-use change might alter not just the biodiversity in a landscape (the focus of most studies), but also the fundamental processes which create and maintain biodiversity at the local scale. It is only by interrogating beta-diversity, for a wider range of taxonomic groups, and across a variety of landscapes, that we can begin to assess how pervasive this finding is.

It will not be easy to generate the data to do this. Technological advances might help, such as low-cost acoustic devices and the increasing application of machine learning in data processing. But given the potential benefits for improving our understanding of land-use change, we believe it will be worth the effort.