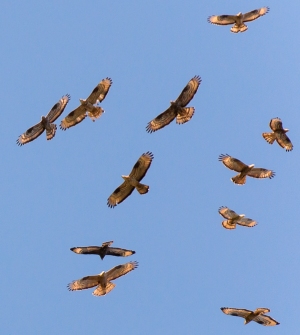 This post is a press release from the authors of Journal of Animal Ecology paper “Seasonal detours by soaring migrants shaped by wind regimes along the East Atlantic Flyway” by Wouter M. G. Vansteelant et al. Issued by University of Amsterdam.

Birds of prey let themselves be carried by predictable winds
At the start of autumn, several billion migratory birds take flight for a long, adventurous journey to Africa. How do they manage to complete this difficult journey successfully year after year? To find out, a team of researchers from the University of Amsterdam (UvA) tracked the behaviour of migrating European honey buzzards using small GPS backpacks. They combined GPS data with meteorological models to show how these migratory birds travel via complicated detours to make use of predictable weather patterns. They do so especially over the Sahara Desert, an inhospitable landscape they need to cross as quickly as possible.

European honey buzzards with GPS backpacks
European honey buzzards look a lot like the better-known common buzzard. However, while the mice-eating buzzard migrates over a distance of no more than several hundred kilometres in autumn, the insect-eating honey buzzard travels over 6,000 kilometres to its winter habitat in tropical Africa.  Honey buzzards nesting in the Netherlands do not travel directly, but take a detour over the Strait of Gibraltar. They prefer to fly a few more days to avoid the dangerous journey over the Mediterranean.  As a result of this water-avoiding behaviour, large concentrations of honey buzzards and other birds of prey can be observed at strategic crossing points around the Mediterranean, a spectacular natural phenomenon already described by the ancient Greeks. Based on observations, we know that migratory birds tend to let themselves be carried by the wind when crossing the sea. This makes sense, because it reduces the risk of exhaustion. It has long been suggested that for longer distances, too, migratory birds may choose routes on which they can make optimal use of the winds. To investigate whether this is indeed the case, UvA researcher Wouter Vansteelant combined the travel data from GPS backpacks attached to honey buzzards with sophisticated meteorological models.

The westerly route
‘Eleven birds, which were followed for a period of two to five years, used a more westerly route over the Sahel and Sahara in spring than they did in autumn. When departing their winter habitat they usually started out flying to the north-west, often facing a weak westerly wind. This seems like an odd strategy, because honey buzzards fast during migration, and by flying into the wind they use up more energy at the start of their journey than necessary. However, this westerly route offers various advantages at a later stage of the journey. It allows honey buzzards to take advantage of favourable wind patterns to cross the Sahara. All through the year, a strong north-easterly wind called “Harmattan” blows over most of the Sahara. As a result, migratory birds crossing the Sahara on the way to Europe face strong headwinds. At the western extremity of the continent, for about half of all days during the migration season, these headwinds alternate with south-westerly winds blowing in from the Atlantic. Their westerly detour allows the honey buzzards to take advantage of these predictable, favourable winds.’

‘Our results show how bird migration routes are shaped by large-scale atmospheric currents’, Vansteelant explains. ‘This has many important implications, for example in predicting how migration routes will be affected by climate change.’ Still, a number of important questions remain unanswered. For example, it isn’t clear how and when honey buzzards learn to take their complex detours. ‘In their first year, young birds migrate to Africa independently of their parents; they use dangerous routes across the Mediterranean more often than their adult species members. This means that the strategic routes are not genetically hardwired, but are learned only later, perhaps not until the third or fourth year in a honey buzzard’s life, when they return to Europe for the first time. At that time, inexperienced birds probably join groups with more experienced birds to learn the strategic routes. We are hoping to establish this in the future by equipping migratory birds with GPS backpacks throughout their lives.’