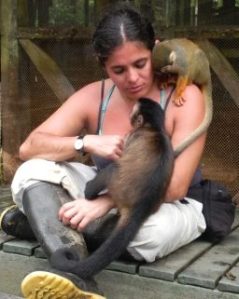 Primate researcher Dr Xyomara Carretero-Pinzón, from the University of Queensland (Australia), recently attended the International Congress for Conservation Biology (ICCB) in Colombia.  Here she reports back on the conference in general and why it was so special for her in particular, finishing with a vital message for conservationists.

Late last month, between July 23rd and 27th, the 28th International Congress for Conservation Biology (ICCB) was held in Cartagena, Colombia. This is one of the most important international meetings for conservation professionals, practitioners and students, and it has finally come back to the tropics after ten years. Delegates from 75 countries participated in this conference to discuss, learn and collaborate about conservation issues at the global scale. This year, the theme “Insights for sustaining life on Earth” was most appropriate for a conference held in a country where the post-conflict represents not only a challenge but an opportunity for people and nature. This main meeting from the Society of Conservation Biology (SCB) is held every two years, and this was the first time in Colombia.  The setting represented an opportunity for conservationists, students and practitioners in Colombia and Latin America to meet, discuss, networking and collaborate with international professionals and conservation leaders.

Thanks to the #ICCB2017 organizers for selecting such a beautiful location for the meeting! I had a wonderful time in #Colombia! pic.twitter.com/nsZQT2UBip

I have been participating in these international meetings since 2008.  One of the main reasons I attend ICCB conferences over the years is because of the inspirational and updating environment that these conferences offer to young conservationists and students.  This year, the conference not only was a rare opportunity due to the location in which it was held – my own country, Colombia. But also because of my interest to know what conservationist in Colombia are thinking after the peace agreement signed by the Colombian government and the FARC guerillas in November 2016. Working with primate populations at different conflict areas of Colombia, from continuous to fragmented forests, has given me an strong urge to learn not only about how primate populations cope with habitat loss and fragmentation, but also to learn how human communities can live with them in rapidly transforming landscapes. This is particularly important now in Colombia because of the peace agreement that is in progress. As the Director of Humboldt Institute, Dr. Brigitte Baptiste, mentioned in her plenary talk “it is a critical and delicate time for Colombia’s biodiversity”.

Between the sloths, moths, mold, moss, algae, and leaves…I may have gotten a portrait of an entire ecosystem. #ICCB2017 pic.twitter.com/Fsr4HUoj6N

A wide range of talks about post-conflict opportunities and challenges for conservation were part of the core in this conference but also an increased amount of talks related with the use of conservation planning tools, biodiversity offsets, conservation in private lands, conservation policy and community based initiatives. A wide range of workshops, lunch discussion and social activities were also part of this huge conference. Of particular interest for students and younger conservationists were the talks about storytelling and social sciences in conservation, which not only highlights the importance that training on these topics has, but also the need that for conservationists to become more interdisciplinary. The need to work with people from social science, business and other sectors is an increasing need on conservation field that start to be highlighted in this international conservation meeting.

An inspirational plenary talk that received many tweets because of the message that it was spreading was the one given by E.J. Milner Gulland from the Department of Zoology at the University of Oxford and Director of the Interdisciplinary Centre for Conservation Science, who give the participants some take away messages after a 25 years of work on natural resource use “stay optimistic, don’t give up, learn a new language and get involved in policy.”