Being similar can be problematic. When ecologically-similar species co-occur, competition can result. So how can this be avoided? A recent paper published in the Journal of Animal Ecology shows how birds avoid their sibling-species competitors. Authors Lechosław Kuczyński, Anna Skoracka, Jiri Reif and Radka Reifova explain.

Mechanisms that enable coexistence of ecologically-similar species are crucial in maintaining biological diversity. When such species co‑occur they inevitably compete for resources, such as space or food. This may lead to a local extinction of the inferior competitor or to segregation of species’ ecological niches.  This process is especially extreme in case of sibling species, which share both environment and traits due to their recent split from common ancestry. 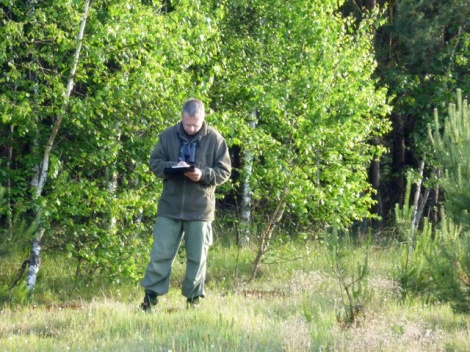 Although the role of interspecific competition in niche differentiation has been the subject of intense studies, these mechanisms are still not fully understood. One of the reasons is the fact that the majority of studies have focused on ecological differences between species in areas of sympatry (where both species coexist within the same geographic area) against allopatry (when species’ ranges do not overlap). However, within a sympatric zone, there are sites which are occupied by both species (syntopic sites) or by only one of them (allotopic sites).  This pattern is often referred as a ‘mosaic distribution’.

Up to now, far too little attention has been paid to the problem how such mosaics arise and how competition contributes to niche segregation. Our research was aimed to fill this knowledge gap by including variation in co-occurrence within sympatry.  However to complete this task, a large-scale and long-term data spanning across allopatry and sympatry of the target species are essential. Gathering such data is beyond the capability of one research group realizing a single project within a restricted time framework. This is when a massive participation of volunteers and a broad social involvement come up to help to address a purely scientific question.

Biodiversity monitoring programmes undergo across the whole Europe since many years. They are based on data collected by skilled volunteers who use standardized protocols to gather relevant, scientifically rigorous, and broadly accessible information. The longest‑running and largest of these citizen science programmes are broad-scale bird monitoring projects (see European Bird Census Council web page for more information).

In our study, we have had an extraordinary opportunity to work with data collected within the Common Breeding Bird Survey in Poland, which runs since 2000 and involves engagement of almost a thousand of highly qualified volunteer ornithologists (Fig. 1). We used data on the abundance of two closely related bird species: the Common Nightingale (Luscinia megarhynchos, Fig. 2) and the Thrush Nightingale (Luscinia luscinia, Fig. 3) collected across their range involving both allopatry and sympatry.  These species diverged in the Early Pleistocene (approximately 1.8 Mya) and currently, co‑occur in a secondary contact zone spanning from Denmark through Germany, Poland, Ukraine, Hungary to the Black Sea (Fig. 4). Morphologically, they are almost identical. They differ in songs, nevertheless, heterospecific song copying occurs in sympatry. Occasional hybridization has been documented indicating that the reproductive barriers are not complete. Both species prefer the same dense shrubby habitats, mostly on moist sites, and their territories are often in close proximity.

We found that interspecific competition gave marked imprints on patterns in habitat preferences of these two nightingale species. Whereas the species preferred the same habitats in allopatry, their preferences became strikingly different in allotopy within sympatry where the abundance of the Common Nightingale increased towards dry and warm sites with low coverage of pastures (Fig. 5A), while the abundance of the Thrush Nightingale showed exactly opposite trends (Fig. 5B). It seems that both species “escape” from competition to allotopic sites covered by habitats avoided by the competitor (Fig. 6).

Figure 6 In allopatry, where both species are free from competition, they have similar habitat preferences. Within sympatry, their preferences diverge as a result of spatial segregation due to avoidance of the competitor. (Image: Reif et al. 2018)

Our findings are important because they show how biotic interactions may shape macroecological patterns. Moreover, they question the widely accepted view on the habitat preference as a species-specific trait invariant across its entire geographic range, as is often treated in analyses focused on modelling of species distributions. Instead, we found that species’ habitat preference is variable across space and depends on the context created by biotic interactions. This finding is particularly important nowadays, as species distribution models became a widely used tool for predicting the range shifts to adopt effective conservation strategies to mitigate climate change impacts. We argue that these models should incorporate biotic interactions, otherwise the model outputs will not provide meaningful guidance for conservation practice. Finally, our study emphasizes the value of data coming from monitoring programmes and the importance of dialogue between researchers and citizens, what is fundamental to biodiversity conservation.