The understanding of the interplay of movement, behaviour and physiology that biologging offers has applied relevance for a range of fields, including evolutionary ecology, wildlife conservation and behavioural ecology. In recognition of this, the Journal of Animal Ecology has an upcoming Special Feature on Biologging  (submissions due 20th September).

There are many different types of biologging devices. Here, Aimee Hoover from the University of Maryland tells us about her experience of using acoustic tags to track leatherback turtle hatchlings in Costa Rica.

Witnessing the vast expansion and miniaturization of technology from my childhood until now made the idea of harnessing advanced technology for my own scientific research highly appealing. My master’s thesis utilized biologging technology to track hatchling sea turtles. By attaching small acoustic tags to leatherback hatchlings, detailed movement data during the ‘lost years’ was obtained, a period of unknown movement and habitat utilization during their early life history. Biologgers made it possible to collect fine-scale movement data, providing information on hatchling sea turtles dispersal upon departure from the nesting beach. Modeling hatchling movement from the nesting beach can now be better predicted and estimates made on their dispersal into developmental habitat. Similar studies once attempted with a mask and snorkel have now advanced to collect much more information timely and accurately because of the small, affordable technology now available. 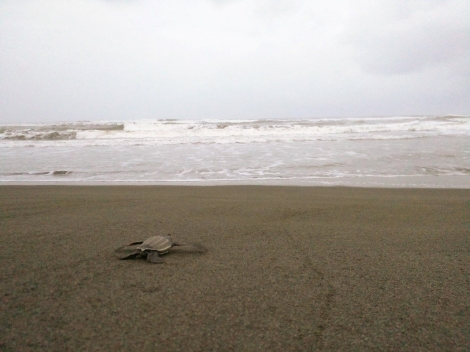 Biologging has allowed for advancements in understanding the ‘lost years’ of sea turtles, for leatherbacks, this is the time they leave the nesting beach as hatchlings until nesting females return after reaching maturity. A leatherback hatchling leaves the Eastern shore of Costa Rica (Photo: Allan Doyle)

My work determined hatchling sea turtle speed and direction via acoustic tags from remote leatherback nesting beaches in Costa Rica. When describing the use of this technology in the marine realm, people often assumed the technology made the fieldwork effortless and simplistic. Field studies are inherently challenging without the complications technology can bring. With technology comes the need for electricity, a particular challenge along many sea turtle nesting beaches. Corrosion is a constant creature to tackle with electronics and their accompanying gear, amplified by limited access to freshwater for cleaning equipment. Even when power and water are no object, obtaining hatchling turtles, coordinating logistics with limited internet and cellular service, and overcoming language barriers challenge any seemingly simplistic nature of this study given the powerful capabilities of biologging equipment. While the cost of this technology has greatly decreased over the years, the gear is still expensive and lucrative in these remote areas. When deploying equipment into the ocean, you have to accept it may never return. Whether this disappearance is from someone intentionally removing equipment from the water, the power of the sea destroying a vital piece of gear, or natural predation working its course, the loss of data can be swift and heartless. Whether it was a tarpon leaping from the water to snag a hatchling or a frigate bird swooping in and flying away with a tag still hanging from its beak, technology cannot overcome the general risks of scientific data collection. The loss feels greater given the expense technology brings, along with the loss of significant data. Biologging can provide brilliant datasets if and when patience and wherewithal are present to overcome the many obstacles of technology in a distant land.

Frigate birds are common near this nesting beach in Costa Rica, where they predate upon hatchling sea turtles. Here, a frigate swoops in on a tagged leatherback hatchling in a failed attempt to capture its prey.

Overcoming these challenges, biologging provided this project hard-to-capture insight into the marine world. We were able to collect data on over 40 hatchling leatherback turtles, a number far exceeding the expectations compared to many movement studies of charismatic megafauna. The vast amounts of data from such studies can be utilized in a variety of capacities, going far beyond what can be explained and understood without this technology. The fine-scale movement information on early life history of leatherbacks has immense potential to better conservation and management efforts throughout their life stages in ways not previously possible in past decades. Biologgers should provide a much greater comprehension of different life stages of this endangered species moving into the future.

Technology is constantly evolving, becoming smaller, cheaper, and better. The construction of biologgers appears more common with open access to designs and easier access to technology components. Data, which once took many people to record, can be done with precision and accuracy by the equipment. I envision a future of big data relatable to a fine-scale context, where the miniaturization of electronics means a much greater understanding of sea turtles and their movement at sea. While technology might not overcome the basic challenges of fieldwork in the natural world, where predators abound and seas are relentless, patience, reserve equipment, and ingenuity will go a long way to furthering the pursuit of sea turtle science.

Tracking a leatherback hatchling with an acoustic tag attachment from a small boat. (Photo: Sean Williamson)