We know that no single species is completely isolated in nature. Rather, each species is constantly interacting with other organisms in order to carry out their life cycles – for successful reproduction, development or survival.

The high diversity of biotic interactions over spatial and temporal gradients generates complex networks, where species are depicted as nodes and their interactions by links. Seminal studies dealing with the structure of ecological networks have assumed that observed patterns and structuring processes are scale-invariant. However, recent studies show that some descriptors of network structure are strongly affected by spatial sampling scales, which could lead to erroneous conclusions regarding the ecological and evolutionary dynamics of ecological networks. In fact, one of the most persistent challenges in ecology is the definition of suitable sampling scales at which to describe an ecological system.

Wesley preparing his boat on the Juruena River to collect ant-plant interactions.

In our recently published paper in the Journal of Animal Ecology, we investigated for the first time whether the spatial sampling scale, from local to regional, affects our understanding of the structure of ant-plant interaction networks mediated by extrafloral nectaties in the southern Brazilian Amazon. In this biotic interaction, plants offer highly nutritive nectar, rich in sugar and amino acids to ants that protect their host plants against herbivores. We chose this type of mutualism as a study model because of its high diversity of interactions at small spatial scales within tropical environments.

The resulting database is one of the largest compiled to date in terms of species richness and number of ant-plant interactions. Specifically, we recorded ant-plant interactions in adjacent 25 x 30 m subplots (local sampling scale) nested within twelve 250 x 30 m plots (regional sampling scale). Moreover, we combined subplots with adjacent or random plots in order to increase the spatial sampling scales at the local and regional levels. We then calculated commonly used binary and quantitative network-level metrics for both sample scales (i.e., number of species and interactions, nestedness, specialization, and modularity), all of which encompass a wide array of structural patterns in interaction networks. 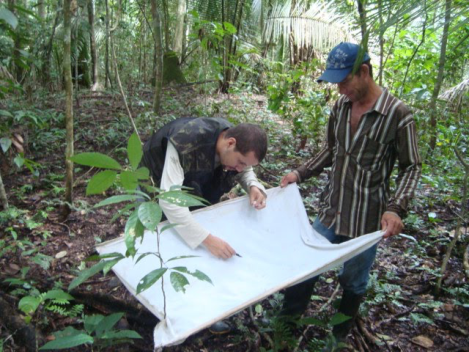 In general, we observed that, despite the accumulation of species and links with increasing sampling scales, most network descriptors tended to be more constant at local compared to regional sampling scales. This cautions against pooling networks from different plots to describe ant-plant interactions, since they may influence metric values depending on the specific plot considered.

We collected the dataset used in this study during my master’s degree (under the guidance of my supervisor Dr. Thiago Izzo) while I was still living in Brazil. During my doctorate in Mexico, I completed an internship in Spain at Pedro Jordano’s Lab where I developed in depth the theoretical framework of this study and also worked with Jeferson Vizentin-Bugoni and Vanderlei J. Debastiani, two other young and promising Brazilian ecologists. After finishing my doctorate, I have been a researcher in the Instituto de Ecología A.C. in Mexico. Currently, my collaborators and I are seeking to understand how biological properties affect the structure and dynamics of plant-animal interaction networks at different levels. We are seeking to understand how species interactions vary through space-time, and how they are influenced by environmental perturbations in different ecosystems around the world (please visit: www.wesleydattilo.org).