This blog post is provided by the Acoustic & Functional Ecology Group at the Max Plank Institute for Ornithology and describes a bat tour to the local lake and how bats use social information to help find food.

“Imagine trying to navigate and hunt tiny insects in the open air within cluttered forests in total darkness”, Daniel invites. “Using purely acousticecholocation. No other animals than bats can do that!” Daniel Lewanzik, a PostDoc in the Acoustic and Functional Ecology research group at the Max Planck Institute for Ornithology (Seewiesen, Germany), and has been fascinated by bats since the start of his scientific career. “Bats are just so incredibly diverse with more than 1,300 species known to date and account for about a fifth of all mammal species worldwide. They live in tropical rainforests as well as in super arid deserts; many species feed on insects, others on fruit, or have even specialised on nectar or frogs. A Few large bats even prey on small bat species!”

Daniel often gives bat tours to pupils, conveying his knowledge and excitement about these “friendly nocturnal gnomes”, as he likes to call them, to prevent pupils from developing unwarranted fear of bats. He then leads them to the shore of a lake where Daubenton’s bats predictably forage in summer. Daubenton’s bats are so-called trawling bats that mostly patrol just above the water to catch small insects from the water surface, happily exploiting the mass emergences of some aquatic insects. When prey is abundant, the pupils can observe multiple Daubenton’s bats foraging peacefully together in a small patch. Yet, where insects are scarce, Daubenton’s bats defend their foraging patch against each other.  Daniel unpacks his bat detector that transfers the ultrasonic frequencies of bat calls into frequencies audible to the human ear. All of a sudden, the silence becomes audible, there are bats all around. Tonight the pupils get to hear four different species: besides Daubenton’s bats, there are also common pipistrelles, Nathusius’ pipistrelles, and noctule bats. Most pupils already know the principle of echolocation, but they are still amazed when Daniel tells them that bats calls are 120-140 dB SPL at 10 cm in front of their mouth. This volume is painful to humans so we are lucky that we cannot hear the ultrasonic frequencies that bats call at.” Thanks to the bat detector, however, the pupils do hear that plenty of insects are preyed upon: every now and then, the crackling sound of bats searching for prey is interrupted by a longer buzz. Daniel explains: “These feeding buzzes are a series of super-fast calls at a very fast repetition rate. Aerial-hawking bats always emit such a buzz right before capturing an insect, which is why the number of buzzes correlates well with insect abundance.”

Other bats also know about this correlation and can exploit the social information encoded in the feeding buzzes, for instance, to find profitable foraging patches. Because bat calls are so loud, this eavesdropping on the calls and feeding buzzes of other bats works over large distances.  Eavesdropping should be particularly beneficial for species that forage on prey that is only available locally and for a short time, such as dense insect swarms that cannot be monopolised by a single individual. Several studies tested eavesdropping by broadcasting feeding buzzes and quantifying the bats’ responses, yet their results are conflicting. Sometimes, bat activity increased in response to feeding buzzes, but in other cases, it did not or even decreased. When comparing these studies, Daniel and his colleagues Arun Sundaramurthy and Holger R. Goerlitz found that broadcast feeding buzz rates differed strongly, ranging from only 1 to more than 60 buzzes per minute. Only a single study also considered conspecific activity. Daniel, Arun, and Holger assumed that these variables would have a strong impact on the bats’ responses to feeding buzz playback and thus might at least partly explain the pronounced differences between these previous studies. 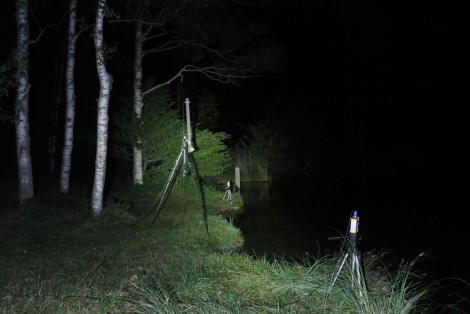 They set out to systematically test their hypothesis by broadcasting a wide range of feeding buzz rates of six different European bat species at 12 different lakes in southern Bavaria (Germany) and analysing the activity changes of the local bat community. For all analysed species, the change in activity depended on the feeding buzz rate, but the strength and direction of the change depended further on the exact combination of playback and response species. In their paper published in the Journal of Animal Ecology, the authors thus demonstrate that eavesdropping on both con- and heterospecific feeding buzzes are a widespread tactic among insectivorous bats to optimise their decision-making. The authors suggest that all investigated bats differentiate between and likely also recognise con– and heterospecific bat species. Heterospecific recognition should be adaptive since the cost-benefit ratio of approaching another foraging bat is determined by the overlap in diet and foraging habitat and the relative competitive abilities of the calling and eavesdropping species. In addition, Daniel Lewanzik, Arun Sundaramurthy, and Holger R. Goerlitz show that conspecific activity heavily modulated the bats’ responses: feeding buzz playback only attracted other bats at low levels of conspecific activity. At high levels of natural bat activity, the additional activity simulated by the playback led to a reduction in bat activity. In summary, the authors provide for the first time evidence that insectivorous bats commonly integrate social information about calling species identity, prey abundance, and the potential level of interference competition from conspecifics when eavesdropping on others. The authors highlight that these findings mark an important step forward in community ecology, explaining species distribution patterns and unravelling mechanisms of species coexistence. 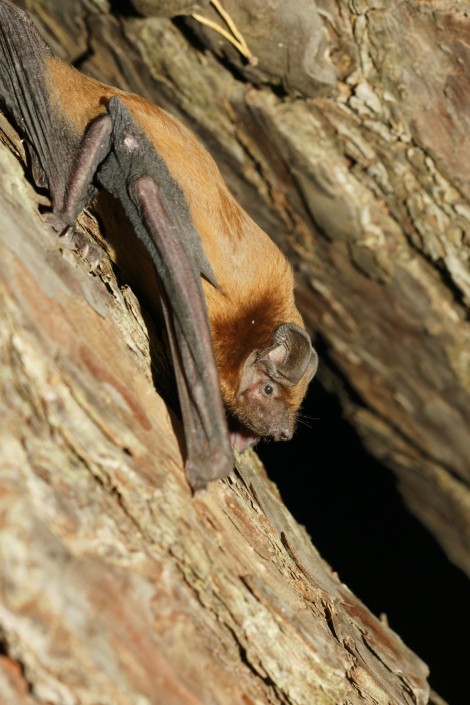