Competition for limited food resources can be particularly fierce where similarly-related species overlap. Harriet L. Clewlow is a PhD student based at the British Antarctic Survey and linked with University of Exeter and WWF (World Wide Fund for Nature). Her research investigates how climate change is altering interactions between sympatric Antarctic penguin species and predicting their responses to future climate scenarios.

Competition is a widely studied factor in ecology due to its strong influence on distribution and population size, as well as defining how species respond to climate change. It can occur both within (intraspecific) and between (interspecific) species and is particularly intense in communities where closely related species breed together at high densities and share limited food resources. The potentially costly impacts of competition are reduced by niche partitioning, most commonly diet, foraging locations and staggered breeding (allochrony).

In a recent paper in the Journal of Animal Ecology, we investigated how competition between Adélie (Pygoscelis adeliae) and chinstrap (P. antarcticus) penguins breeding side-by-side on Signy Island, South Orkney Islands is reduced by staggered breeding, which is a 28 day offset in this location, and whether it is resilient to climate change. These two species are closely related, consume the same prey and are both experiencing large population declines. Therefore, they experience particularly high levels of interspecific competition. Signy Island is located in one of the most rapidly warming areas on Earth and we wanted to know whether the population declines are occurring because climate change is affecting how the two species interact with each other. 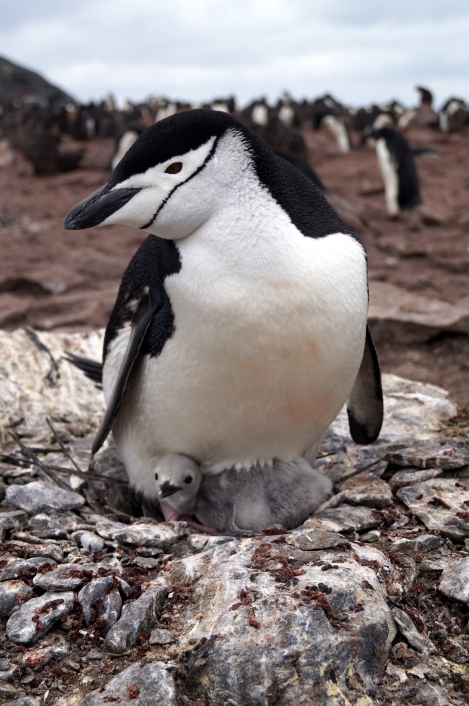 Using GPS and time-depth recorder tags, which measure pressure, we produced a 3D image of their foraging behaviour during the breeding cycle. Their breeding cycle lasts for around 4 months and consists of three stages; incubation, brood-guard and crèche. Logistical constraints meant that it was not possible to tag all individuals in the population, so we modelled a virtual colony based on the tagging data. This allowed us to compare the foraging areas of the two populations during each breeding stage and determine their overlap. As these two species eat the same prey and are similar sizes, meaning they can dive to similar depths to catch prey, they are likely to be competing for food in areas of overlap. Future climate change impacts were tested by artificially removing the 28 day breeding offset and observing how the species overlapped under these conditions.

The foraging areas used by the two species were found to be highly similar within breeding stages but different between breeding stages (see figure below – A=incubation, B=brood-guard, C=crèche; red= chinstrap, blue=Adélie). This, combined with their 28 day breeding offset, caused them to leapfrog each other throughout the breeding season, meaning they were foraging in different locations on the same calendar day. This partitioning of their foraging niche reduced overlap, and thus competition, between the species by 54% over the entire breeding season. However, if climate change caused the breeding offset to reduce by just a single day overlap would increase by 2.1% over the entire breeding season.

Climate change is causing the two species to advance their breeding, but they are doing so at the same rate, preserving the niche partitioning and 28 day offset. This indicates that it is resilient to climate change and thus is not, currently, driving the observed population declines of these species across the Western Antarctic Peninsula. 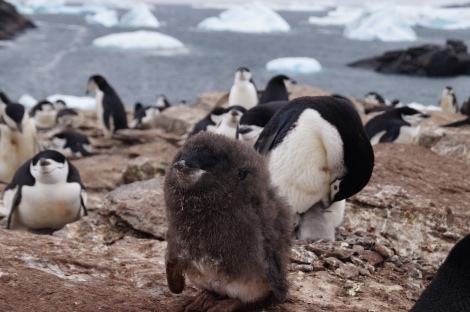 There’s a penguin in that fluff… somewhere (Photo: Harriet Clewlow)

In this paper we quantified the reduction in competition provided by staggered breeding for the first time and developed a greater understanding of the mechanisms of climate change impact on these important species. Additionally, the leapfrogging behaviour described here is likely to occur in other seabird species and may alter their responses to environmental changes or novel species.

One response to “Penguin niche-partitioning resilient to climate change”