A recent paper published in the Journal of Animal Ecology has found that a chronic shortage of females in a critically endangered parrot species has led to love triangles, sneaky sex on the side, increased fighting between males, and fewer babies.  Here to tell us more are three of the authors: Rob Heinsohn, George Olah, and Dejan Stojanovic. 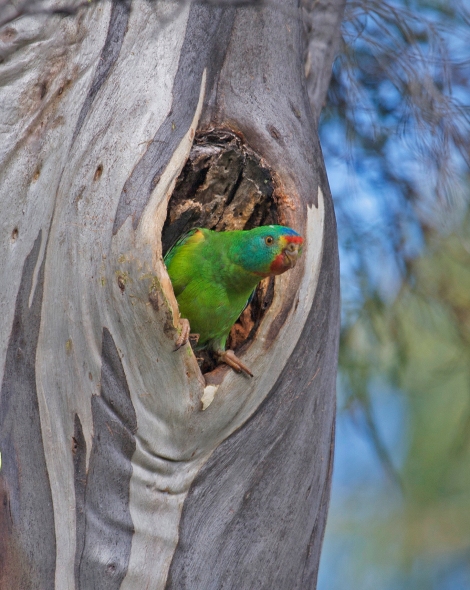 Most birds are at least socially monogamous, although paired individuals in many species often seek various benefits from extra-pair sex. The ratio of males to females plays a large role in determining the mating system, and even large, long-lived bird species can change to mate sharing when males outnumber females. Parrots are considered to be mostly monogamous but occasionally mate in different configurations when there is a scarcity of mating opportunities. In a recent paper in the Journal of Animal Ecology we outlined a revealing case of a parrot species that appears to have adopted high rates of extra-pair sex after the sex ratio became strongly male-biased due to unnatural causes. We found that mating in trios came at a cost to both individuals and the population. 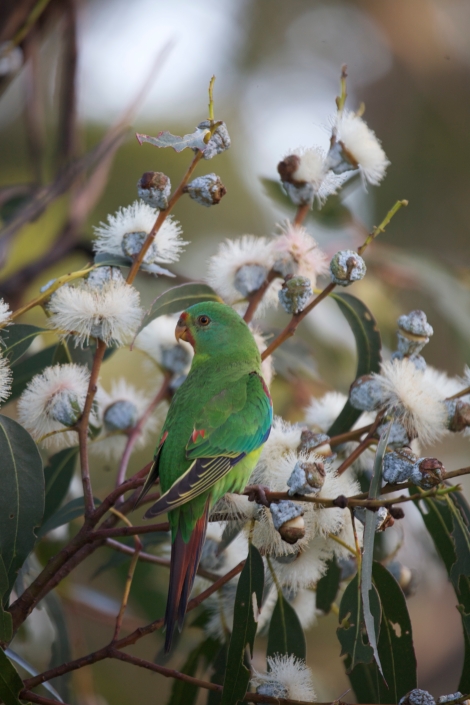 In 2014 we reported that an introduced predator, the sugar glider (Petaurus breviceps), kills large numbers of breeding female swift parrots (Lathamus discolor) in their nest hollows. These small marsupials can access the hollows high in old Eucalyptus trees and kill the female while she is incubating her eggs. Sugar gliders were introduced accidentally to Tasmania in the 19th century but have proliferated in recent times as forests become more disturbed and fragmented. Swift parrots are nomadic and gain a limited reprieve from this introduced predator in occasional years when their food, nectar from flowering Eucalyptus trees, becomes available on predator free islands. On average though, over 50% of adult female swift parrots die each year from sugar gliders leading to a population in freefall with a projected decrease of over 90% in 16 years. 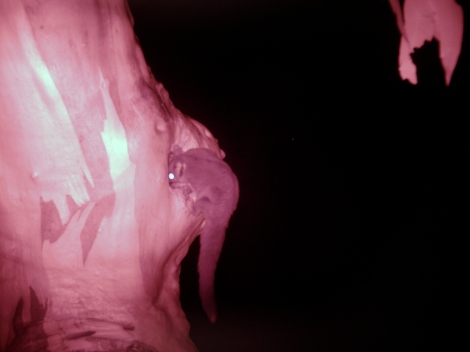 Male swift parrots now outnumber females almost three to one. We became aware that at many nests an extra unpaired male would hang around and harass the resident female and sometimes engage in courtship feeding with her. The resident males were constantly chasing these interlopers out of the territory. When we examined the mating system using molecular techniques, we found that over half of the nests had babies with more than one father. In other words the resident females were engaging in sneaky sex with the extra males. We think it must have been in the females’ best interests to mate with other males just to get them off their backs.

Our analysis showed that mate sharing was not beneficial for anyone in the ménage à trois. The overall number of fledglings produced fell when the sex ratio was more male-biased, and shared paternity went up. Female reproduction went down a little but males suffered greater individual losses whenever mate sharing occurred. It is not surprising that males fight so hard to protect their mates, but it seems they lose precious time and energy constantly chasing the intruders away and may be unable to feed the nestlings as much.

Our study is important because it teases apart how individuals in populations may be affected differently by introduced predators – especially how the loss of so many females can change the balance of the sexes, as well as the whole mating and social system. Swift parrots are not the only species where the fabric of society is threatened by too few females. This process is happening in other birds, reptiles, and even humans in some parts of the world.

Our team is looking for innovative ways to limit the impact of sugar gliders on swift parrots. Our first success was to improve the habitat for swift parrots on small islands off Tasmania where sugar gliders do not occur by providing over 500 nest sites including nest boxes and artificially cut hollows. Our other strategy has been to invent a new type of predator-proof nest box for when food availability leads to the swift parrots breeding in predator infested habitat on mainland Tasmania. We now use a light sensitive door that effectively locks the breeding female safely inside the nest box at night, and opens at first light to let her out in the morning. Our ‘possum-keeper-outerer’ or PKO holds great promise if we can get enough females to use nest boxes instead of natural hollows.

The myriad impacts of an introduced predator are just one side of the equation in saving swift parrots from extinction. The other side is a continuing loss of their blue and black gum forest habitat due to industrial scale logging and other processes. Swift parrots are migratory and every year, upon their return to Tasmania, they look for the right combination of ephemerally flowering eucalypts close to old growth forest with enough tree hollows. Habitat has been so reduced that in some years they fail to find enough opportunities to breed. Solving the sugar glider problem will not save swift parrots from extinction if habitat continues to be lost.

One response to “A high cost of infidelity for swift parrots”