F61 and F51, adult female cougars (Puma concolor), also called mountain lions, were very nearly the same age when they gave birth to their first litters of kittens within a month of each other in 2011. The pair of big cats were neighbors in adjacent and overlapping home ranges in the Bridger-Teton National Forest, east of Grand Teton National Park in northwest Wyoming, USA.

A well-placed motion-triggered camera caught a fortuitous image of F61 and F51 spending time together in early 2012, accompanied by their four kittens (1 from F61, 3 from F51). It sparked great discussion among our team, many of whom were convinced they must be close relatives, perhaps sisters. Indeed, prevailing theory supported the idea that close kin were more likely to be close to each other and tolerant of one other. Thus, it just made sense that the two cats would be kin. At the time, however, we did not know the genetic relatedness of cougars in our study, except of course, kittens born to females we were tracking.

Cougars are solitary carnivores expected to interact only during the breeding season or to settle territorial disputes. In short, we expect cougars to avoid each other. Nevertheless, the two prevailing theories explaining the spatial organization of animals within populations, the land-tenure and kinship theories (e.g., Diefenbach et al. 2006; Griffiths & Armstrong 2001), suggest that female solitary carnivores might overlap more in space than males, and that individuals that are more closely related to each other will be clumped together within populations. Spatial clumping might also lead to higher social tolerance between closely-related individuals.

In early 2012, F51 and F61 were spotted together several more times and often near carcasses of animals we assume one or the other had killed. This led to more questions and more debate among our team. Perhaps prey distributions and availability were a contributing factor in cougar interactions? So, we did our best to devise a study to begin to unravel the social organization of pumas in our study area. Our goal was to test whether home range overlap between individuals was explained by the prevailing theories—land tenure or kinship—or perhaps, by the distributions of prey.

Assumptions of the land-tenure hypothesis could be tested with location data and subsequent home range calculations. Anthony Caragiulo joined our team to provide genetic analyses so that we might assess kinship. That left prey distributions, which we needed at a fine enough scale to compare across home ranges and within home ranges as well. But we lacked these data, nor were they available from other researchers and wildlife managers in the region. After some creative thinking and lively discussions, we came up with the idea of “hunt opportunity”—an analysis that provided a mathematical value representing the probability that a cougar would kill prey in any given location across the landscape. Then we used hunt opportunity as a proxy for likely prey distributions. Skeptics may feel this did not represent true availability, but given that raw prey numbers do not represent true availability either (e.g., Backwell et al.1998), this seemed a viable solution. And it worked.

Elk, deer, and other ungulates migrate seasonally in the Southern Yellowstone Ecosystem where we study cougars. In winter, our study area sees a massive influx of elk as they aggregate in groups of hundreds and thousands at lower elevations to avoid deep snows, and near supplemental feeding grounds maintained by the Wyoming Game and Fish Department and the National Elk Refuge. Thus we expected winter prey distributions rather than summer to better explain variation in home range overlap among individual cougars.

F51 and F61, as it ends up, were completely unrelated. F61 was born in the study area, whereas F51 immigrated in from elsewhere. The overlap between their home ranges supported higher winter hunting opportunities, as we expected given the large seasonal aggregations of prey in that season. And this pattern held true across other cougars in our study as well, as can be read in our new paper just published in the Journal of Animal Ecology. Kinship failed to explain variable home range overlap among cougars, whereas hunting opportunity and land tenure did. Our results provided an initial foundation from which to interpret our field observations of F61 and F51, and may indicate that solitary carnivores are more tolerant of sharing key resources with unrelated others than previously believed, or at least during periods of high resource availability.

And this is just the start—we’ve launched new methods with motion-triggered cameras to better understand cougar interactions and to unravel when and why they come together. This research is forthcoming.

The stunning landscape at the heart of our study area. Photograph by Mark Elbroch / Panthera 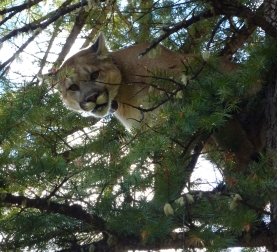 An adult female cougar, held in a tree by baying hounds, during capture efforts. Photograph by Mark Elbroch / Panthera.

F61 standing over an elk calf she killed. Photograph by Mark Elbroch / Panthera.

F51 and her female offspring, F70, seated near an elk cow killed by F51. Photograph by Mark Elbroch / Panthera

Figure 1 from our paper in Journal of Animal Ecology, depicting the study area and home range overlap between several female and male cougars. Artwork by Patrick Lendrum and Mark Elbroch / Panthera.

One response to “Spatial overlap in a solitary predator”