A recently-published paper in the Journal of Animal Ecology has discovered that the grey squirrel (one of the most impacting alien invasive species in Europe) causes an increase in chronic stress in the native red squirrel. Lead author Dr Francesca Santicchia is a research fellow at the University of Insubria in Italy. She had studied the relationships among parasites, physiological stress, and personality in grey squirrel / red squirrel interactions. In this blog post, she tells us more about her recent paper.

Our native red squirrels (Sciurus vulgaris) are threatened with extinction in large parts of the UK and Ireland and in areas in Northern Italy colonised by introduced invasive grey squirrels (Sciurus carolinensis). The replacement of native red by alien grey squirrels, a North America tree squirrel species, is a paradigm of the negative impacts induced by biological invasions on native ecosystems. It is based on two mechanisms of competition: food exploitation competition with grey squirrels strongly reducing the availability of tree seeds for red squirrels leading to a progressive reduction in the fitness of red squirrels; and disease-mediated competition where the grey squirrels acts as healthy reservoir for a shared pathogen, the squirrelpox virus, that causes high mortality in the native species. 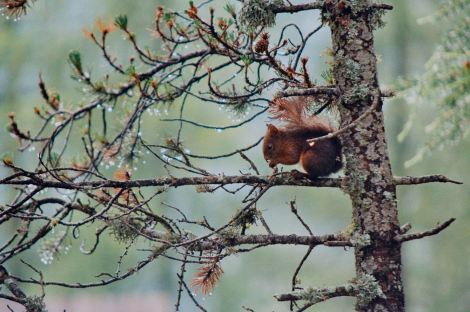 Mammals produce extra amounts of glucocorticoid hormones when trying to cope with harmful environmental stressors. However, when elevated glucocorticoid concentrations persist over longer periods of time, they often have negative effects on an animal’s fitness. Since these stress hormones are metabolized in the gut and excreted into the faeces, their concentration in faecal pellets – taken from red squirrels when they are captured for routine population dynamics studies – can be quantified as a stress parameter without the need of taking blood samples. When these concentrations of glucocorticoid metabolites excreted in faeces (FGM) are significantly higher than normal levels, they indicate an increase in chronic stress, a situation with potential devastating effects on the animal.

We predicted that since, for red squirrels, the ‘natural’ situation is being the only diurnal arboreal mammal in our woods, grey squirrels colonizing these habitats will act as a true environmental stressor. We tested this in three ways.

This study shows that the invasive grey squirrel acts as a stressor which significantly increases physiological stress in the native red squirrel. This is a subtle form of interspecific competition, which may exacerbate the effects of food competition. In fact, both a lower food intake and chronic stress can produce a reduction in body growth and reduce reproduction among the red squirrels that are forced to share their habitat with the invaders. Ultimately, smaller size, lower fertility, and reduced recruitment of juvenile red squirrels will lead to the extinction of a population in few years’ time.