Identifying the factors shaping variation in parasite diversity among host species is crucial to understand wildlife diseases. A recent paper in Journal of Animal Ecology investigated the role of host life history and ecology in explaining the species richness of micro- and macro-parasites in birds world-wide. Lead author Dr Jorge Sanchez Gutierrez explains more about the study.

The phrase “comparing apples and oranges” is often used in ecological and evolutionary contexts to make the point that differences in the “basic biology” of different taxa make any comparison invalid. Like apples and oranges, haemosporidians (unicellular blood parasites causing malaria-like diseases in birds) and helminths (parasitic worms such as tapeworms, roundworms and flukes) are in different branches of the taxonomic tree. But are they that different?

Unlike the tiny mosquito-borne haemosporidians, helminths are usually visible to the naked eye and do not multiply directly within an infected individual. Instead they produce infective stages that usually pass out of the host before transmission to another host. Unlike blood parasites, helminths tend to produce weaker immune responses in infected birds. It is thus likely that the two classes of parasites would lead to different selection pressures on hosts, and vice versa.

Yet, despite obvious differences in their transmission modes and virulence, they often infect the same host—be it an individual, a population or a species. Surely then, there are valid comparisons that can be made? And would such a comparative approach also identify potential red herrings arising from single group-based approaches? A comparison between these parasitic apples and oranges could help illuminate whether and how bird traits shape the diversity of these two parasite groups. 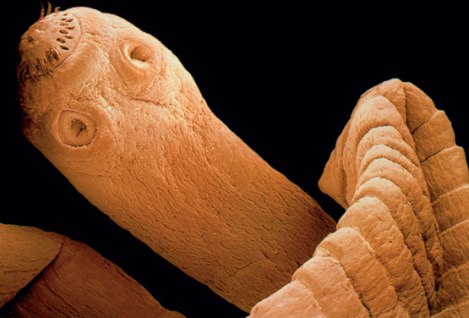 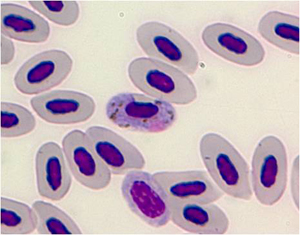 To answer this question, I teamed up with my colleagues David Thieltges and Theunis Piersma, both senior researchers at the Royal Netherlands Institute for Sea Research with broad and complementary experience in the field of parasite/host ecology. In an earlier study, published in Journal of Biogeography in 2017 (https://onlinelibrary.wiley.com/doi/abs/10.1111/jbi.12956), we (together with Eldar Rakhimberdiev) examined the correlates of helminth richness in Charadriiform birds (waders, gulls, auks and allies). We found that birds that exploit diverse diets and habitats harbour more helminth species, that is, relative to specialist birds.

In the present study in the Journal of Animal Ecology we went one step further and investigated whether these and other host traits (for example, migration distance, longevity or coloniality) correlate with the species richness of helminths and haemosporidians in birds worldwide. Historically, this line of research has focused on mammals, since global databases encompassing both micro- and macroparasites were largely restricted to mammals.

This meant that I had to put my shoulders to the wheel and combined several global-scale datasets on traits of over 300 bird species and the numbers of their blood and worm parasites. After controlling for research effort—some bird species are better studied than others—and bird phylogeny, we found that helminth richness positively correlated with bird longevity, geographic range size, dietary breadth and migration distance. Overall, such results are consistent with epidemiological and biogeographical processes. To our surprise, however, the only factor that explained some variation in the richness of blood parasites was research effort! 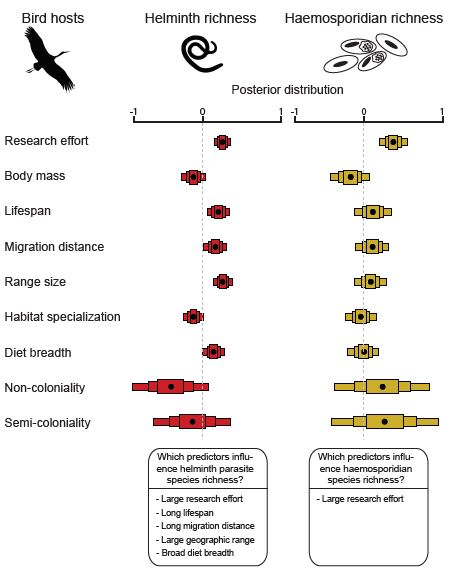 Perhaps the simplest explanation for this lack of association between haemosporidian richness and bird traits is that blood parasites may be more influenced by factors related to the ecology of the arthropod vectors than the traits of the host. Another possibility to explain the non-significant relationship between haemosporidian richness and bird longevity (which we predicted to be negative, as haemosporidians can lower survival rate) is that haemosporidian parasites may lead to effective immune defence strategies, the response destroying what would have initially been an association. On the contrary, we found a positive effect for less pathogenic helminths that seldom kill their host. It might well be that long host lifespans promote the diversity of helminth parasite assemblages over evolutionary time, ultimately resulting in richer helminth faunas.

Although from a statistical point of view it remains open whether there are actual differences between the two parasite groups in the role of host life history and ecology in determining parasite richness of birds, the presence of many significant correlates within helminths but none in haemosporidians is intriguing. We hope that this study will bring renewed attention to the factors that determine patterns of parasitic infections. While writing this blog-post from tropical West Africa, where parasitic helminths are among the most common chronic infections and malaria parasite infection the most deadly, I realize about the importance of investigating the drivers of global patterns of parasite diversity and distribution to anticipate disease emergence risks, in both humans and wildlife.

Gutiérrez, Piersma and Thieltges (2019) Micro- and macroparasite species richness in birds: the role of host life history and ecology. Journal of Animal Ecology.